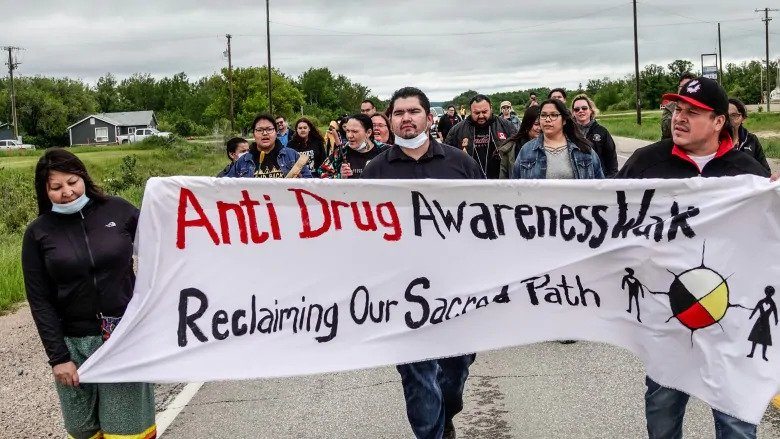 The chief of Brokenhead Ojibway Nation hopes a new reward-based tip line will help her community take a stance against drug use and trafficking on the Treaty 1 Nation.

Chief Deborah Smith said the First Nation, located about 65 kilometres northeast of Winnipeg, is setting up a confidential email account for people in the community to provide drug-related tips to help its leadership tackle the issue.

“What we want to do with our community is have a safe place for people to bring forward information on the drug trafficking in our community,” Smith told CBC News on Sunday.

The campaign focuses on how to stand up drug dealers and steps to reduce and eliminate drug use.

Smith said drug use is a struggle in her community that needs to be healed.

“Right now, our First Nation is suffering and we’re facing challenges with respect to drug use and drug dealing in our community, and we see a lot of impact in our families,” Smith said.

Smith did not specify what are the most prevalent substances or which ones in particular are contributing to her concerns.

Just one person will be responsible for taking all the tips, she explained, and there will be incentives in place. That information will be passed on to RCMP and Manitoba First Nation safety officers.

Having its own drug bylaws, Smith said Brokenhead has the power to enforce its own fines and evict or banish those members who they determine are dealing drugs.

Kevin Thomas, who is a member of Brokenhead council, echoed Smith’s concerns and said it’s important for everyone to get involved and support one another when it comes to pushing for change.

“It’s affecting everybody — not only the people that are using it, their families are affected, the whole community is affected by the drugs and the CFS issues.”

It opened with a pipe ceremony and a round dance on Highway 59, near the Brokenhead River.

Organized by Brokenhead’s leadership, the community justice committee and Jordan’s Principle staff, Smith said the gathering signified their commitment to a drug-free future by curbing the buying and selling of drugs on the First Nation.

“The biggest impact is with the child welfare system,” she said.

As one of the organizers, Smith said the walk also marked the beginning of the new education program.

With files from Radio-Canada’s Ezra Belotte-Cousineau